There are some great apps and online resources to use with students in order form them to create comic style pieces of writing. Students can use iPad app Halftone ($0.99) to upload one image (or take a new image) and then turn it into a cartoon style image. They  can select the layout, paper style, add speech/thinking bubbles, add stamps and then save their image to photos. A similar Android app is called Comics Camera which is free.

Another iPad app that students can use is called  Photo Comic which is currently free (soon it will cost $0.99). However, this app allows students create a comic using a range of frames. They can select 1 to 5 frames to work with and select from a range of layouts. I created the comic strip below on my flight back from Sydney (click image to enlarge). 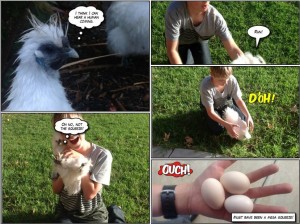 Comic Editor for Android looks similar and it only costs $1.61. Please note, I haven’t downloaded Comic Editor so I don’t know its full functionality (just what I know from the video demonstration).

Richard Byrne blogged a great article called ’10 ways to create comics online’ in December 2010. Here is the link to a great list of online resources that Richard recommends.