AR stands for Augmented Reality, it “is a live, direct or indirect, view of a physical, real-world environment whose elements are augmented (or supplemented) by computer-generated  sensory input such as sound, video, graphics or GPS data” (http://en.wikipedia.org/wiki/Augmented_reality) . The AR Alphabet app created by Mitchlehan Media, has been around for a while now but they have recently added dinosaurs and the dinosaurs actually move! Furthermore, the app once cost $0.99 and now it is free (I am guessing for a limited time). You can download the app for iPad and Android. Once you have downloaded the app you will need to download the AR cards (also free) and print them in colour. 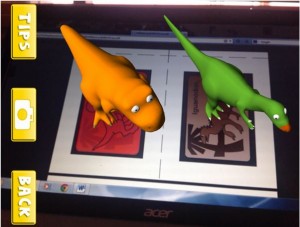 For use in the classroom, I suggest that you laminate the AR cards once you have printed them. Using their device, students can view multiple letters or dinosaurs at the same time. My daughter used them to create zoo enclosures. You could extend this further by asking students to sort animals with similar characteristics or animals that could live next to each other in a zoo.  You could even ask your students to use the cards to create, view and capture (using the camera tool on the app) their spelling words.