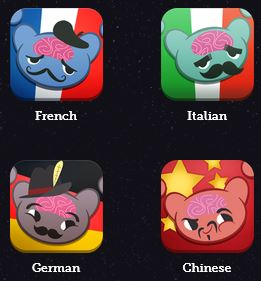 ITALIAN: The Molto Bene app provides over 40 interactive lessons. It is available for Android and for iPad. Furthermore, this app works offline too, since all the data and audio are contained in the app. You can also download the Italian English Dictionary app for both Android and iPad. Another free app is Learn Italian Free which is available for iPad only.

MULTIPLE LANGUAGES: The Google Translate app is free for both Android and for iPad. Translated words are provided with a dictionary definition and an option to hear the word in the selected language. The Duolingo app is free for both Android and iPad. This app helps users learn Spanish, French, German, Portuguese, Italian, and English. Another multi-language app is Wordzine, available for iPad but it costs $0.99. This app uses picture and word association to teach Portuguese, Spanish, French, Italian, German, Dutch, Russian and Chinese. There are 12 themes some of which include school, super market, home, people and beach. I also recommend that you visit MindSnacks online for links to their apps for Spanish, French, Italian, Portuguese, German, Chinese and Japanese which are all free. At this stage thisMindSnacks if for iPad only.