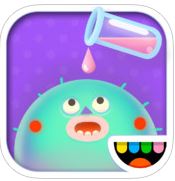 For iPad Users: Toca Boca have a range of other apps available and some are free. If you are quick you can get Toca Kitchen for free for a limited time from the app store! Normally this app costs $2.99. Other free Toca apps include Toca Kitchen Monster, Toca Hair Xmas Salon, Toca Tailor Fairy Tales,. The other Toca apps cost $2.99. I bought Toca Builders and highly recommend this purchase.

For Android Users: There aren’t as many Toca apps available on Google Play compared to the App Store. However, Toca Hair Salon is a free fun app for students. The other Toca apps do cost but they are cheaper than the App Store. Toca Builders costs $1.16 and you will not be disappointed with this purchase.