Looking back through my posts,I can’t believe I haven’t blogged about these little robots as we’ve been using them at school for I don’t know how long, I am guessing 8 years at least. A Bee-Bot is a colourful, simple-to-use programmable robot for which is perfect for teaching simple programming concepts, controls, directional languages, sequencing, estimations and problem-solving. On top of the Bee-Bot, it has arrow keys to instruct it to move forward or backward in 15
centimetre steps, or turn left or right by 90 degrees. Then, you press the go button to watch the robot move.

Bee-Bots robots are very robust. We started out with 6 and then I purchased another 6. Then at the start of last year I made a very bad purchasing order, and purchased 6 Blue-Bots with a charging station. I made this purchased based on two reasons.  Firstly, the Blue-Bots came with a charging station which meant I didn’t need to buy batteries for teachers and they’d be better for the environment.  Secondly, I thought they would good because they were advertised to be innovative. Blue-bots use Bluetooth and “can be controlled using a tablet or PC/Mac whereby you create your program on screen, send it remotely and see Blue-Bot performs your program right before your very eyes!”(source withheld). Hence, I thought we could utilise the apps on our iPads and extend our students.

Wrong, very wrong. Firstly the Blue-Bots are extremely hard to connect via Bluetooth, not only causing frustrations for teachers but students alike. Secondly, within a year 3 have stopped working. The motor in their wheels is very poor and they simply don’t move anymore! Conversely, our original 12 Bee-bots have lasted between 8-6 years and they are still going! So this year, I purchased another 6 of the original Bee-Bots with a charging station, making our total 24, well really 21 as 3 Blue-Bots are not functioning.

Anyway, I’ll get to my blog topic, ‘Bee-Bot ballerina’. One of our Reception teachers, Jo Szegedi has been the founder of our Bee-Bot program. We use them to teach students how to follow, describe and represent a sequence of steps and decisions (algorithms) needed to solve problems (ACTDIP0040). Initially students are given a range of Bee-Bot mats and asked to program their Bee-Bot to reach a desired location without picking it up. At first, this involves a process of trial and error. However, as students learn programming instructions they are then encouraged to predict and record their Bee-Bots code. For example, in the picture below, the student was asked to predict and write the code for the Bee-Bot to reach the green circle. 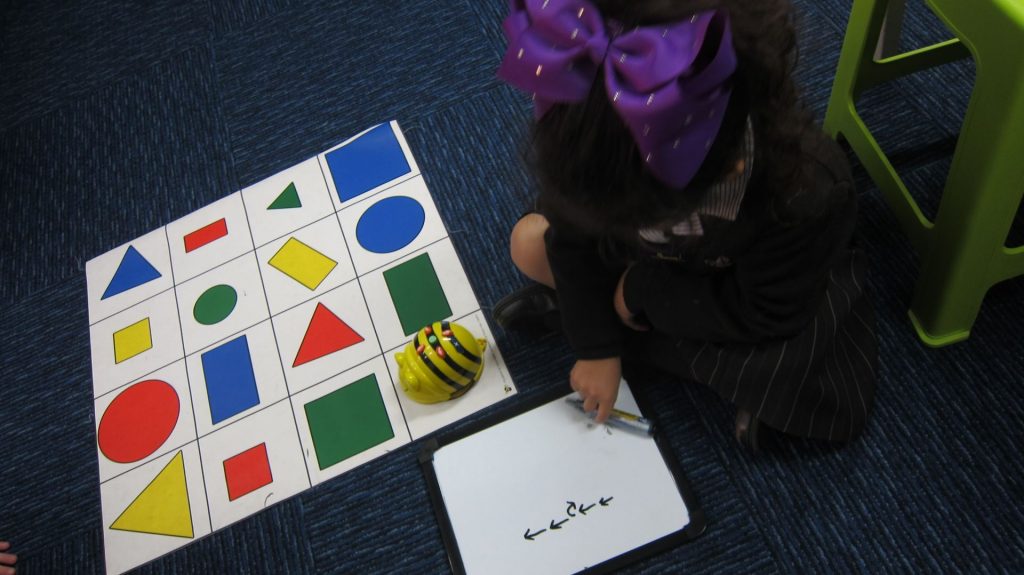 Jo found that this year students were reluctant to record in their books but they were more than happy to record on a whiteboard.

I still haven’t got to Jo’s Bee-Bot ballerina concept yet. Before I do, Jo also mentioned that she like to get students to work in pairs. One partner writes the code (Bee-Bot movements) and the other partner needs to predict where they think the Bee-Bot will end up. Then the partner runs the program and finds out if they were right! 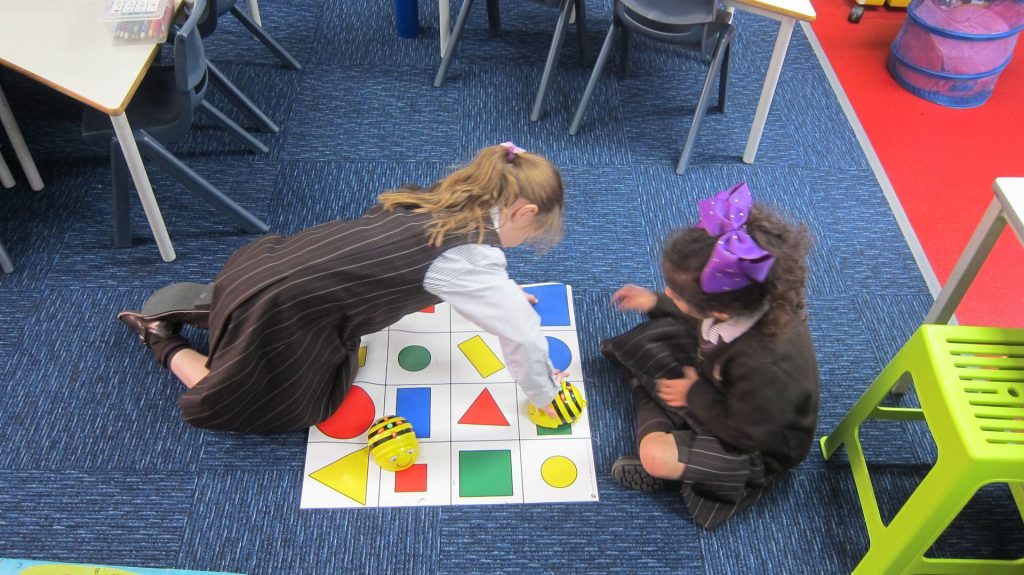 So now for the Bee-Bot ballerina concept. For the past 5 or so years, Jo has had various floor rugs in her classroom which have a grid, something like the one below (image LINK  but note, I am not promoting any particular product, just an example). Using a rug like this, she could stand in a square and show students that a Bee-Bot turn was a 90 degrees turn on the spot, not a Bee-Bot distance movement. However, now she has a plain coloured rug in her room and was unable to do this. So she came up with the idea of the Bee-Bot ballerina move. A ballerina does a pirouette on one foot, hence a turn on the spot. So does the Bee-Bot. When it turns, it turns direction not distance. Neat idea and the students picked up on this concept quickly. 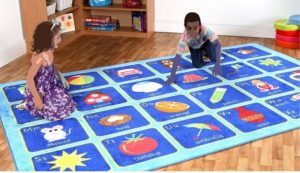